I’ve had friends that have spent time in smaller cities (i.e. Victoria) tell me that “small is good, man.” and it has taken a while for me to really appreciate this.  I’ve sort of had enough of Toronto (see: leaving for Vancouver for school in September) but I never thought I could really stand a much smaller city.  4 days in Hali and I am realizing that I would like it more than I even realize.  People are much more laid back, casual, FRIENDLY and uninterested with what others think.  The music and DIY scene(s) is/are small, but at least you will come to know people more organically.  I realize now how Halifax and Victoria and Hamilton have been able to produce concentrated pockets of unreal talent.  There seems to be a lot less competition, and a lot more collaboration.  Not that the Toronto scene is dying, but I think it is becoming oversaturated and underwhelming.  There is something exciting about heading to a new city and seeing how they do things.  Most of the time, they do them damn well.  This is something that my grade 12 Toronto snob self would have never said!

NOW FOR MARITIME PICTURES AND SOME KNITTING

Hangin’ with the Queen and celebrating Canada’s inception I have had enough time to finish my first knitting project in a while. 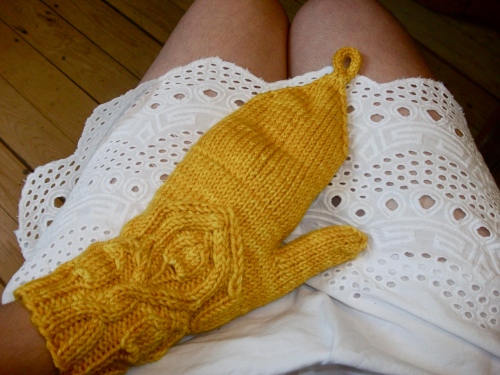 It has been cathartic to finally take up my needles again, and make something for myself.  I’ve had a bit of finishing anxiety and have  Let at least 2 pairs of gloves fall to the wayside since December.  These are Ysolda’s Snapdragon Flip-top Mitts from her pattern set whimsical little knits 2, a sweet Conversat gift. I forget the yarn name right now, but it’s a superwash that actually maintains its colour, sheen and softness.  I will buy this light worsted yarn again, for sure. The cables on these babies are just numerous enough to keep things interesting but not make you want to pull your hair out.  They go by fast (I finished one in 3 days) so they were a happy knit.  These are for ME ME ME and I love them already.  So warm and so beautiful.  I think I’m going to go for a grey button to affix the flap with, but robin-egg blue is also a contender. I’ll show you when I find the perfect ones! 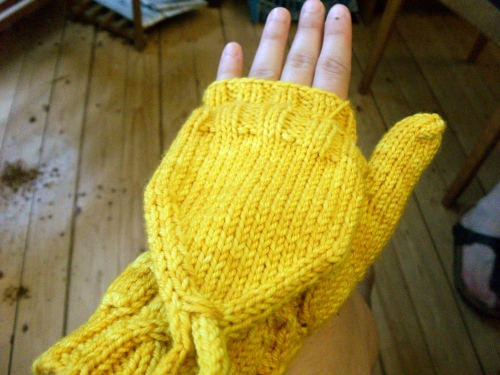 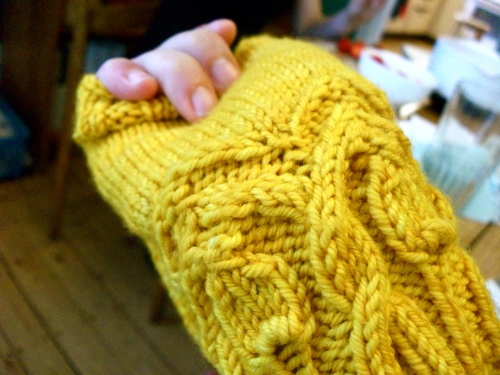 Biggest knitting news is that I’ve found three good friends who want to improve their basic knitting, and want to do so in a lovely downtown park with some wine in nalgenes.  So begins another knitting club and so continues more of a great summer in the city.  Music, crafts, friends and the outdoors: July & August 2010, here we come.